The regular patterns of the sky at night will always have been known to sailors and country people who were about when there were no lights but the embers of a wood fire to hinder seeing them. The only prehistoric measurements that can be accessed today were those of events on the horizon.   For instance at Newgrange the passage points to the rising sun at the winter solstice.  At Stonehenge with a relatively flat horizon and visibility all round, the position of any rising or setting star as seen from the centre could be marked by a stone pillar.  Many such guesses  had to be ditched when it was found that they relied on a miscalculation of the date of Stonehenge but the details shown on the plan below are not affected.

Events on the horizon at Stonehenge 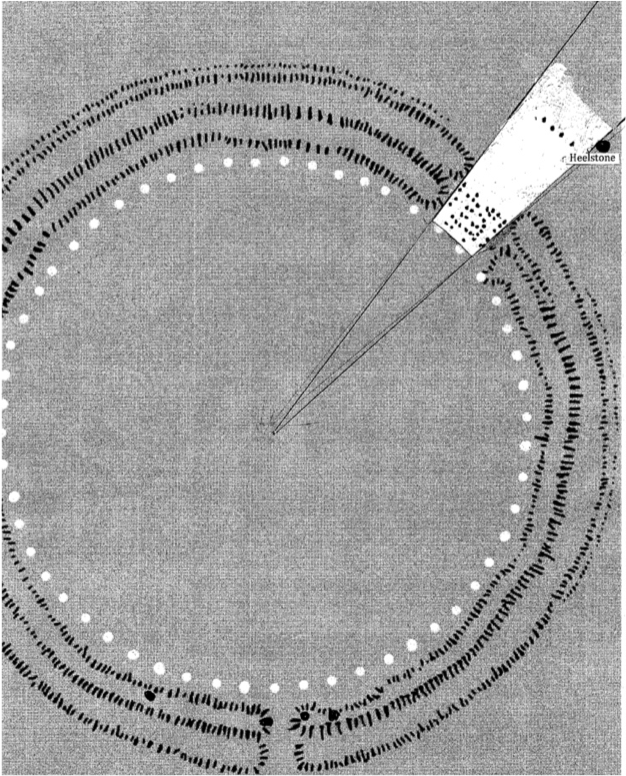 PLan B  Stonehenge showing original entrance. Drawn by Adamsan the part in white and the two lines are an addition

This plan shows two entrances at the time the bluestones were taken there in the first phase of construction.  The stones were placed in the 56 the Aubrey Holes, represented by white dots.  The entrance at the bottom of the plan is roughly south and is marked by foundation deposits shown as black dots.  The north-east entrance is framed on the south side by an alignment from the centre to the rising sun at the summer solstice, passing the dot that represents the Heelstone at an angle of 50.  In 1972 C.A. Newham suggested that the north side points to the furthest north of the winter full moon (as it still does). He also suggested that the 6 rows of small post holes in the entrance (Newham 15), shown in Plan B above, could be the remains of 6 sets of annual observations of the position of the rising point on the horizon of winter full moons, each set taking 18.61 years, leading after about 112 years to the establishment of the alignment to the maximum north alignment of winter full moons.  Newham seems to have been forgotten but now the age of the deposited bones is known to be a century or two earlier than the ditch they were put in, his suggestion could be an explanation of what was going on in the time between the consecration of the bones and the digging of the ditch where they had been buried.

A distinguished author has suggested that the postholes in the entrance were not set up set as Newham suggested but are in arcs with three different centres. As he remarks that every item at Stonehenge was set up for a purpose he should explain the purpose of each of the three centres.

The notable symmetry about the whole north-east ntrance indicates something more interesting than has been generally realised.  It shows the astronomer priests were interested in the moon as well as the sun.  The furthest north or south of the  movement of the sun along the horizon at summer and winter solstices could be established in a few years. The observers seem to have been prepared to go to considerable lengths to do the same for the moon.

Every year at Stonehenge 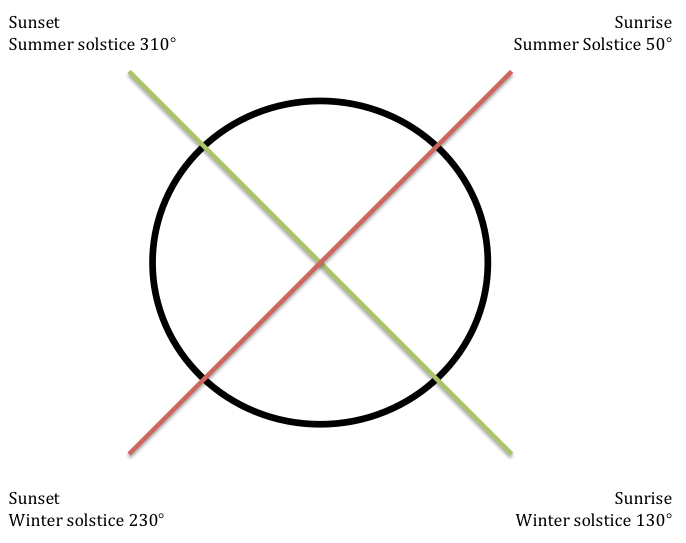 As the axis of the rotating earth is at an angle to the plane of its rotation round the sun, the angle of the axis moves annually from the summer solstice, when it is sloping towards the sun, then away from that position to the winter solstice and back again every year. The maximum positions north and south for Stonehenge are shown on the diagram. The red line on the plan shows the Stonehenge midsummer axis. The plan is drawn for the latitude of Stonehenge. The position of the solstice sunrise is only a little different from when the stones were set up. On the summer solstice the sun moves clockwise from sunrise, top right of the red line, to sunset at 310 at top left of the green line, the longest day. It continues unseen through the shortest night. By the next dawn the tilt of the axis is less so the next day is a little shorter and so on until it reaches the winter solstice, shown bottom right, when the sun goes through the shortest day and longest night. After that the process is repeated with each day getting longer.

A scientist asked for the movements of the sun would probably say a sinuous curving line that crosses the vertical line  at right angles at midday and slopes downward at dusk and upward at dawn and continues to do so as day follows day. That might be appropriate when viewed from the centre of the earth’s orbit but  to the naked eye on the the earth it appears to come back to more or less the same place at the end of 24 hours. The viewer sees a circle as shown in the last paragraph  because he or she is on a moving platform.

Archaeologists know that every year at dusk on a winter solstice the moon can be seen, when standing near the Heelstone with the stone to your left, setting opposite to where it rises at midsummer. The plan explains why.

Midsummer sunset and midwinter sunrise are not marked by the stones but are shown on the plan with a green line between them to demonstrate the symmetry of the plan.  At Newgrange the green line was chosen for midwinter sunrise. There the sun shines into the chamber on the winter solstice sunrise only. As Newgrange has a different latitude the angle between the lines, at Stonehenge 100,  is not quite the same.

When there is an eclipse on a solstice at Stonehenge 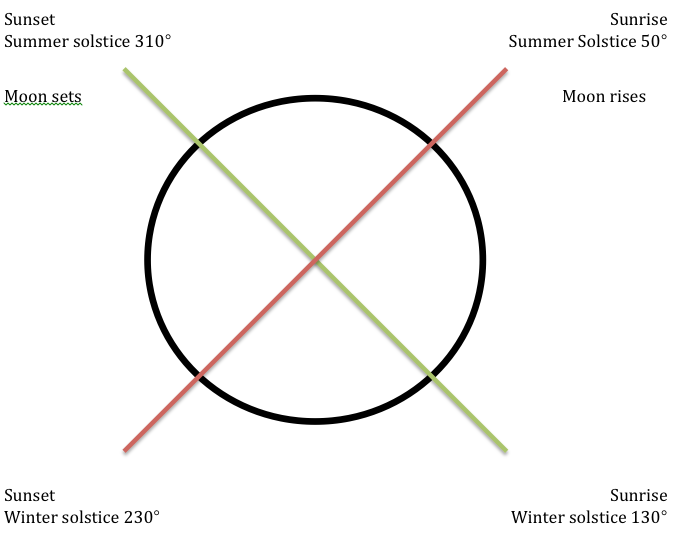 This does not always happen but since 1926 there have been eclipses on winter solstices every 19 years, with a break of 8 years on one occasion. The nineteen year cycle of events involving sun and moon was known in antiquity and was called ‘Metonic’ after a Greek astronomer, Meton, though probably known much earlier. It is mentioned in Chapter 5 item 1 where the sun god Apollo danced every 19 years at the Island Temple, argued here to have been Stonehenge.

The only addition to the first Plan is the positions of the rising and setting moon.  The logic for putting them in the positions where they are is that  when there is an eclipse of the moon sun, moon and the curve of the surface of the earth are in a straight line so when one rises the other sets or vice versa like a giant seesaw in the sky.  The moon thus rises over the Heelstone  opposite a setting sun and sets opposite a rising sun. In both 2010 and 2029 the time of the eclipse meant the moon was or will be fully eclipsed as it sets, though not on the end of the solar corridor, in a predictable position when seen from the centre of Stonehenge.